PRESS STATEMENT ISSUED BY SENATOR OLUREMI TINUBU, OON, IN COMMEMORATION OF THE 16TH ANNIVERSARY OF THE DEATH OF AN ICON, ALHAJA KUDIRAT ABIOLA. 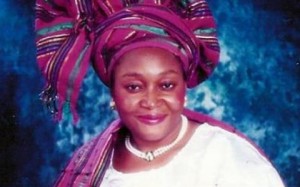 Exactly 16 years ago today, at the behest of anti-democratic forces that still seek to perpetuate their hold on Nigeria, Alhaja Kudirat Abiola, was felled, in cold blood, by assassins’’ bullets. On June 4, 1996, Alhaja Kudirat Abiola, a mother, a committed housewife and exemplary patriot who had become a potent force in the campaign for social change was martyred for her unwavering commitment to the cause of democracy

That is why today, as always, many continue to recall with clarity, her ardent commitment to her husband, late Chief M.K.O. Abiola and the cause of justice, democracy and the rule of law. With thirteen years into civil democracy, there is no better time for Nigeria’s current leaders to immortalise selfless fighters like Alhaja Kudirat Abiola and her husband, Chief Moshood Abiola whose struggles gave birth to the democracy that we all now enjoy.  I call upon the government, even though belated to name a special day after late Chief MKO Abiola and Alhaji Kudirat Abiola or approve a national commemoration of the June 12 democratic struggle. This would be the right thing to do and would be most appropriate.

Like her husband, Abiola she made her mark in history, making the supreme sacrifice for the cause of justice and democracy in Nigeria. Though martyred, Alhaja Kudirat Abiola, her husband and other Nigerians who risked all and stood firm on the right side of history will forever be remembered for planting the seeds of progressive politics that many of us will continue to identify with.

For my family, the ferment across the nation during the defining moment of Alhaja Kudirat Abiola’s energetic and vibrant defiance of military dictatorship and arbitrary use of coercive power remain evergreen. My dear husband’s uncompromising loyalty to Chief Abiola’s cause and the June 12 mandate made us prime targets too but in spite of the aggressive hounding, self-exile and unforeseen disruption of our family life, we comparatively got off very lightly. For standing by the cause of truth, many were unjustifiably jailed, tortured, robbed of their means of economic survival and many more faced other forms of deprivation.

The mass suffering unleashed on millions of Nigerians by two callous military regimes of the same hue, along with the globally condemned incarceration of her husband brought out the fiery activism in Alhaja Kudirat. She became a major voice in the National Democratic Coalition (NADECO).

Following the unjustifiable annulment of the June 12, 1993 presidential election and the incarceration of her husband in 1994, Alhaja Kudirat defied danger and rallied Nigerians against the barefaced violation of the people’s fundamental right to elect a government of their choice.

For instance, she actively mobilized support for starting and sustaining the twelve-week oil workers’ strike that temporarily paralysed the military regime. In December 1995, she defied the intimidating guns of military personnel by joining the likes of Chief Anthony Enahoro, Pa Ajasin, Pa Rewane,Baba Adesanya, Chief Bola Ige,  Senator Bola Tinubu and others who led Nigerians on a freedom march around Lagos.

Even in death, the light she shone will never dim in intensity. Alhaja Kudirat Abiola remains an inspiration to us and coming generations; through passionate commitment to high ideals and defiance against anti-democratic forces, she has joined the pantheon of the true heroes of Nigeria’s struggle for democracy and development.

She has become one of those great women icons of our history who lived their lives for the betterment of the common people.

Born in Zaria in 1951, Alhaja Kudirat Abiola married at 21 and gave much of her time to her home, social causes and business. History shows that either of crises and opportunity reveals the true core of human personality; in her own case, the daunting coercive apparatus that held Nigeria in its firm grip motivated her into action and sacrifice of historical proportions.

Alhaja Kudirat Abiola lives on in the minds of the people. May God bless her soul and the children she left behind.