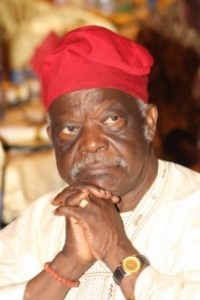 The death of former Nigerian Ambassador to Ethiopia, Ambassador Segun Olusola is a great loss to the people of Lagos Central Senatorial district, Senator Oluremi Tinubu, OON has said.

“With the passing of Ambassador Segun Olusola, Nigeria has lost a national icon, Lagos Central Senatorial district has lost a rare gem; we have lost  a man of many parts. He lived a life worthy of emulation and his death saddens us all,” the Senator stated in a press release issued in Abuja.

Recalling numerous instances when she worked with Ambassador Olusola on various social causes while she was First Lady of Lagos state, the Senator noted that the late ambassador’s commitment to welfare issues and the lightening of others’ burdens endured until he passed away.

“He touched many lives and impacted our nation positively in many areas. He was an extraordinary promoter of Nigerian, nay African culture; a charity activist, a brilliant and knowledgeable diplomat whose grasp of issues was empowering.

“In Ambassador Olusola, the man who gave us the “Village Headmaster” soap opera that many of us watched with relish while growing up, Nigeria has lost a great mind and no doubt, an elder statesman.

“We can look back with joy at unselfish fruitfulness of his 77 years on earth and the legacies he built; from these, we can draw inspiration and encouragement in the knowledge that it is in the service to our fellow man that we can leave the boldest imprints in the sands of time. I will never forget how I worked with him to reach out to the needy and how he guided me in the direction of where service was most needful.

“The only way we can repay Ambassador Olusola in death is to make sure the ideals that he lived for never die. Nigeria must also recognize and preserve his works for generations yet unborn.

“Those he left behind can take consolation in the fruitful life he led and how his commitment to social causes was focussed on benefitting the neglected and underprivileged members of our society,” Senator Tinubu stated.

In 1987, he was appointed Nigerian Ambassador to Ethiopia and the Organisation of Africa Unity (OAU).

He also served the Country in various and private capacities, including as founding director of both the Players of Dawn 1958 -1964 and Theatre Express 1966 – 1969; Chairman, National Festival Committee and the Nigeria Arts Council, 1970; Director, Second All – Nigeria Festival of Arts and Culture 1971, and; Vice Chairman, Broadcasting Organisation of Nigeria Planning Committee for the Second All African Games – 1973.

He was also a lecturer at the Nigeria Institute of Journalism (1973 – 1974); Chairman, Programmes Committee Management Board, University of Lagos’ Centre of Cultural Studies and creator/producer of the popular Television Programme ‘The Village Headmaster’, the longest running series on NTA.
He was also Vice President, Alumni Association of the National Institute of Policy and Strategic Studies (1993), Chairman, International Centre for Arts, Lagos, founding President, African Refugees Foundation, (AREF) and Ajibola Moniya Arts Gallery.