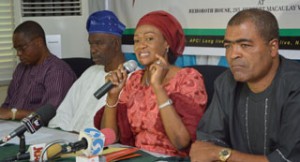 Senator Tinubu said she sponsored the Motion on Flood Disaster in Lagos and the motion on the urgent need to investigate the imminent collapse of the Third Mainland Bridge, Lagos.

She listed Lagos Central Constituency projects captured in the budget to include the on-going construction of a N222.3 million Drug Rehabilitation and Counselling Centre at Gedegede, Eti Osa; the construction of N223 million ultra-modern market in Oke Ira, Eti-Osa and a N220 million model primary school at Takwa Bay in Iru/Victoria Island Council.